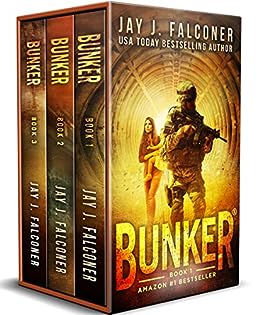 When a coordinated EMP attack takes out the nation’s power grid, a small town finds itself at ground zero of an all-out invasion.

With limited options and no time to prepare, the citizens have no choice but to turn to a mysterious drifter, Jack Bunker, for help.

The former combat engineer has the skills to keep them alive, but he won’t be able to do it alone, not against an overwhelmingly superior force. Somehow he’ll have to find a way to transform the mild-mannered townsfolk into military-grade warriors and lead them into battle, despite his dark past that leads some to wonder whose side is he really on?

When a covert communication is intercepted, Jack Bunker and the town leaders of Clearwater swing into action to uncover the secret behind its deadly intent.

However, before their defenses can be fortified and the threat neutralized, a ruthless faction gains a foothold, turning to kidnapping and mayhem for control.

As the body count rises, Bunker is forced to summon a part of himself he loathes in order to save everyone he cares about.

But rescuing his friends won’t be easy, not when the insurgents focus their attention on him and his mysterious past.

When the perpetrators finally reveal themselves, Jack Bunker finds himself the target of a deadly manhunt. The invaders need him eliminated at all costs. He’s all that stands between them and complete control. Yet mortars, artillery, and machine guns are not the only threats Bunker must face. News of an airborne pathogen spreads panic across the countryside, leaving everyone to fend for themselves, including Bunker after he’s wounded. Eventually the citizens of Clearwater must make an impossible decision: resist with their lives or serve on their knees. Unless, of course, Bunker can somehow survive his ordeal and save everyone he cares about.

The insurgents rule of terror is complete. They control everything. Everything except a band of patriots who want their town back. Reclaiming their home won’t be easy. Not against overwhelming firepower. But Jack Bunker is ready. He has the skills and training to lead them in an explosive battle of survival. Victory will come at a steep cost; however, when dark secrets are revealed, exposing some while protecting others. Treachery abounds as tempers boil, romance blossoms, and codes are deciphered, leading some to make deals with the enemy to settle old scores. For Jack Bunker, trust soon becomes a luxury. So does time, when the grand conspiracy finally reveals itself.

The insurgents are dug in and ready for war.

To them, it’s about guns, guts, and glory. For Bunker, the flag and freedom are paramount. He’s prepared to fight, despite their overwhelming firepower.

As the final confrontation nears, Bunker knows death comes with it. Some will perish so others can live.

But in the end, who will stand atop the rubble to claim victory and will there be anything left worth protecting?

Prepare yourself for an ending so shocking it will leave you breathless.

Tess Wainwright finds herself at ground zero when soldiers brutally attack the American Center in Moscow. No one is supposed to live to tell about it, but somehow she does.

When Tess learns of the Kremlin’s plan, all of Russia’s resources are brought against her.

Against all odds, she fights to stay alive and return home to the USA, where she finds help from a mysterious drifter named Jack Bunker. A man who has never lost a fight.

But even this struggle may be too big for Jack.

The 4 Disciplines of Execution: Revised and Updated: Achieving Your Wildly Important Goals