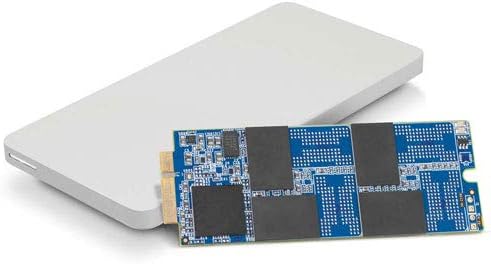 OWC redesigned its 3rd generation of OWC Aura Pro 6G SSDs with premium 3D NAND Flash and the latest controller technology to operate cooler and consume less power, resulting in improved battery life for your MacBook Pro. OWC SSDs are engineered to be the best for Mac, undergoing a rigorous multi-stage lab testing process to deliver absolute reliability at maximum performance long into the future.

OWC Aura Pro SSDs provide a noticeable increase in performance over the factory SSDs for all MacBook Pro with Retina display models:

Everything You Need, Ready for Installation

Re-use the factory SSD via the OWC Envoy as an external storage solution.Take your data with you — Small enough to keep in a pocket or laptop case!Easily add additional laptop storage with no AC adapter required.

Your Mac and OWC Aura. More than you thought possible.

The OWC Envoy Pro combines elegance and functionality into a sleek, portable external storage solution that complements the design and finish of the MacBook Pro with Retina display. Its anodized aluminum body protects your drive and data, while its minimal size allows for simple stowing in coat pockets, backpacks or briefcases.

Upgrade your rMBP’s factory installed SSD with greater performance and capacity via the Aura Pro. Retask the replaced factory SSD as a bus-powered*, pocket-sized external storage solution via the Envoy Pro.

The USB 3.0 interface offers speedy transfer rates of up to 500MB/s and the Envoy Pro requires no AC power.

Aura PCIe-based flash storage upgrades are precisely engineered for your Mac laptop, so you’ll never need to compromise your data by relying on complicated software hacks.

7% OVER PROVISIONING:  OWC SSDs perform maintenance tasks in the background that optimize the health, performance, and endurance of your flash drive.

Aura SSDs are designed from the ground up for reliable performance and complete compatibility with your Mac.