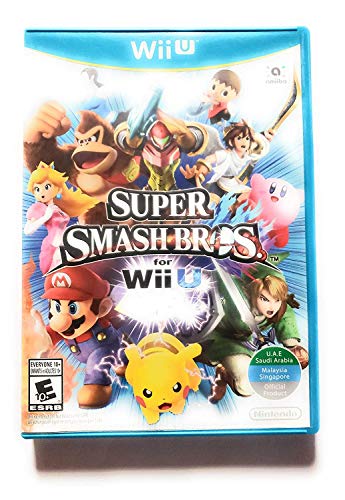 USA NTSC version game with World Edition packaging as pictured. No Region Restrictions. Battle it out as Nintendo’s greatest heroes on the Wii U console Face off against the biggest roster of Nintendo all-stars ever assembled! Send your rivals flying with powerful attacks to earn all-new customizations and equipment that trick out your fighter’s moves and stats. Then power-up and train intelligent amiibo figures* to take on your friends! The multiplayer showdown** you know and love is now on the Wii U console! Take on all comers as Mario, Mega Man, Sonic, and more gaming greats. Or tap an amiibo* to the Wii U GamePad controller to train it up by battling with or against it. You can even pit your amiibo against a friends’ to see how your training methods stack up. *amiibo figures sold separately ** Broadband Internet access required for online play. Learn more on Nintendo website.
Compete with classic players from the Super Smash Bros. series,along with new challengers like Mega Man, Little Mac or newlyannounced Palutena, the Goddess of Light from the Kid Icarus games.For the first time, players can even compete as their own Mii characters.
Use a variety of control methods during the high-energy and action-filled battles, including Nintendo GameCube controllers – thelongtime controller of choice for hard-core Super Smash Bros. players.
Customize move sets when playing locally or online with friends. Connect with amiibo for added fun.
Experience the beauty of Super Smash Bros. for Wii U in stunning HD,a first for the series. Fight against friends and family locally or online, or battle randomchallengers from all over the world online in “For Fun” or“For Glory” modes.